Solar Is No Longer a Compromise

In diverse markets across the world, Solar PV energy has reached pricing competitive with fossil fuels.

The recent COP21 in Paris featured a fundamental change from previous summits – this time, many of the talks included solutions based on renewable energy, specifically on solar power. Why? Because solar power is getting increasingly cost competitive compared to fossil fuels.

Recently, the International Renewable Energy Agency (IRENA) released REthinking Energy, an info-graphic that clearly shows that large-scale solar photovoltaic (PV) power plants can generate electricity at a cost level that is already lower than diesel, nuclear, LNG, geothermal and offshore wind. Even power generation cost based on coal, biomass, onshore wind and hydro are within reach (see graph) and will soon be undercut by solar as well. 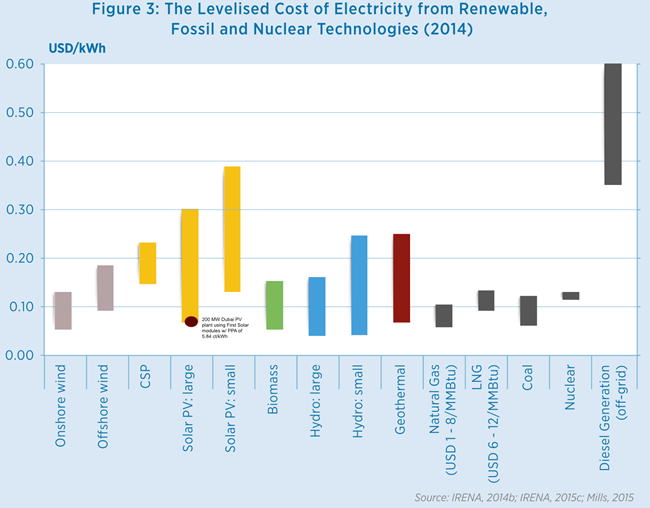 First Solar has been a leader in reducing the cost of solar energy. Our advanced PV solar modules are currently being used to build the solar plant with the world’s lowest, unsubsidized tariff in a power purchase agreement (PPA). When the PPA price for this winning bid for a 200 MW tender of the Dubai Electricity and Water Authority (DEWA) was announced at the beginning of this year, most experts in the power sector were caught by surprise about the low level of 5.84 US cents per kilowatt-hour (kWh). There are several other utility-scale solar projects in a number of countries supplying electricity at prices that are close to this level and we expect to see new record lows likely being announced as early as next year.

There are many factors for producing record-low energy costs

The final levelized cost of electricity (LCOE) of a power plant is the result of several factors. This includes the cost of the modules and balance of systems as well as the financing costs. The energy yield of the solar power installation also plays a significant role. In fact, no other single part of a solar project investment drives returns as much as the energy output does.

While having an optimally designed solar power plant based on high-quality balance of system technology is fundamental to reach high yields, it is equally important to select the right module. First Solar’s high-efficiency modules are proven to deliver more energy per nameplate watt than silicon modules.

First Solar modules are well known to perform particularly well in hot climates where many utility-scale solar systems are installed. As ambient and module surface temperatures rise, a solar module’s performance will decrease. First Solar’s thin-film modules - due to its unique CdTe semiconductor material – decrease in energy output at a slower rate than conventional silicon modules, and the higher the temperature the greater the CdTe advantage.  And because all modules are rated at a standard temperature of 25C, First Solar modules outperform Silicon in the majority of real world operating hours, which typically have a median operating temperature of 50-60C or higher.

Humidity plays an important role in solar energy yields as well.  As atmospheric water absorbs certain wavelengths of light, less light falls on the earth as humidity increases.  But First Solar modules outperform Silicon modules with respect to a reference irradiance sensor due to the differences in behavior arising from the semiconductor material quantum efficiency curves.   Here again, CdTe has an inherent performance advantage over Si.  Silicon has a greater dependence on longer wavelength light, so that increasing humidity will cause Silicon’s energy conversion to decrease at a much faster rate than for CdTe.  In fact, CdTe’s conversion efficiency is such that it will increase compared to the reference sensor in high humidity conditions!

When you put these two important environmental conditions together, such as  in hot and humid climates, like the Middle East, First Solar modules are independently verified to produce up to 9% higher yields.

The message is clear – solar power is a cost-effective solution today that can increasingly compete with incumbent fossil fuel-based power generation sources. The key to success is now for solar plants to reach the highest possible generation yields to enable the lowest possible LCOEs.