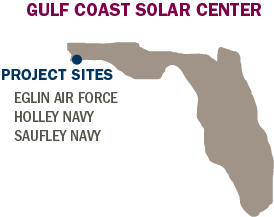 Early in his presidency, US President Barack Obama made a commitment to significantly increase renewable energy used and created on military installations by 2020. First Solar recently signed an agreement to help military bases live up to this commitment.

First Solar will supply advanced CdTe PV solar modules to Coronal Group for use in three solar plants to be built on U.S. military installations.Elgin Air Force Base, Holly Naval Base and Saufley Naval Base will soon be home to PV solar plants capable of generating 120MW AC of power, collectively. All three bases are located in the southeast region of the U.S. in the state of Florida.

First Solar landed the agreement in part due to its manufacturing advantage. When working with military bases or under most DOD contracts, it is mandatory that the materials used comply with the Trade Agreements Act of 1979 (the “Trade Act”). Most solar companies do not have the ability to supply solar technology from countries that pass muster under the Trade Act. In contrast, First Solar is able to provide companies working within these guidelines with high-volume quantities of approved modules fully manufactured in the USA.

The projects are  scheduled to be completed by the end of 2016.